Why Nigerians Are More Afraid of Police Than Criminals 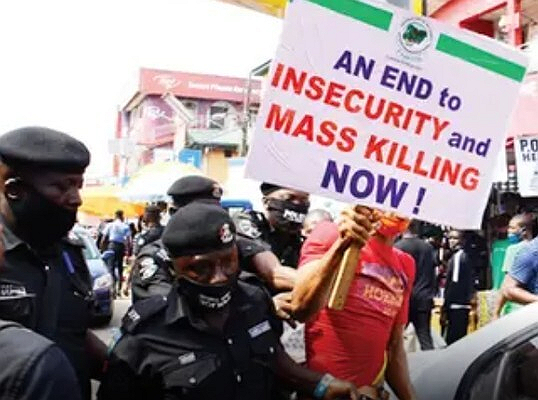 What does it say about a society when people fear the police more than the criminals? It means that the society is broken and the level of consciousness within the society needs to be risen. Unfortunately, that can only be achieved using a completely new way of thinking that only concepts such as the HERU Interface of Black Consciousness can provide.

Police brutality in Nigeria has been a concern among Nigerians for a very long time. The situation has now come to a crisis as anti-police brutality protesting (#ENDSARS) against the country’s special anti-crime unit, better known as SARS, has turned into all out violence. Dozens of protesters have been killed by the police, special forces and the Army and the protesters have returned the favor by burning down numerous police stations, businesses, and government offices.

If you are like me looking in from the outside, you might feel that it’s terrible that the police are killing innocent protestors but how did the situation get so terrible? The truth is that the whole of the society is to blame. The SARS force was created as a result of the senseless violence that permeates Nigerian society. There are several types of feared criminals that people used to dread more than the police.

The first type of criminals that are prevalent in Nigerian society are Ritualists. They kidnap people on a regular basis then dismember their victims and sell their body parts to people who then use the body parts in their own rituals. Who are the customers, you might ask? The customers are everyone from preachers and business people to everyday citizens who couldn’t give a damn about their neighbors. This is a real sickness within the society.

The second most feared criminals are bandits who kidnap business people, politicians, and anyone they suspect of having family wealth. Kidnappers will kill their victims even after receiving their ransom demands so no one ever wants to encounter them. The third type of feared criminals in Nigeria is the robbers. They mostly prey on businesses and Banks but they will rob anyone for their cars, cell phones, and cash.

All three types of criminals usually operate in gangs. SARS was created as a special task force to focus on investigating these criminal gangs while allowing regular police officers to focus on other crimes. Over time, the tactics that SARS used to gather evidence became corrupt. They would detain and torture suspects in order to extract information in their investigations but when the suspects died during the interrogation, their bodies were dumped. When SARS took down gangs, they often extra-judiciously killed all the suspects. Eventually, they began to be perceived as lawless criminals themselves with no accountability to anyone. Women often accused them of rape and men of battery without just cause.

So, how did the Police become just as bad as the criminals? We can’t compare them to American Police because we know that most instances of Police brutality in North America is due to racism. The answer is that they lack morals and accountability but that explanation is still too simple isn’t it? The fact is that the whole of Nigerian society is to blame. They are suffering from a deficiency of conscience.

Before Nigerians condemn me for sounding self-righteous, I also believe that the whole world is suffering from a deficiency of conscience. I’m also from a country with one of the highest murder rates on the planet. We also had a special force we called ACID that became corrupt and called out by Amnesty International. The force was disbanded but crime and violence only continued. Today there are over 1000 murders in Jamaica every year for the past 20 years. This is in a population of only 3 million people, not even the size of some Nigerian cities.

Human cognition only operates in two states; conscience and desire. Conscience is an energy field that connects us to the Great Spirit that is the Universe. The more attention we give it, the more it grows to strengthen our empathy, care, and concern for other people. These are the building blocks of our morals.

Desire on the other hand, is an energy field that grounds our Soul to the Earth. It induces us to seek out the pleasures of life which provides us with a false sense of happiness. Everyone, including preachers override their #conscience in order to enjoy the pleasures of life. That is why you see Preachers buying multi-million-dollar Jets, fancy Cars, luxury Houses, and designer clothes.

#Nigeria now has some of the richest preachers in the world while the vast percentage of the population is poor. It tells everyone in society that money is king therefore they are doing anything to get rich. If a deceiver comes to them and tells them that the best and fastest way to get money is to kill a woman, boil her vagina and breasts and eat them, they will do it. The ritualists then gets rich from selling deception to hundreds of people.

The only problem is that people who go to ritualists don’t see that it’s their money that is making the ritualists rich. They think that it’s because the ritualist is also eating body parts to gain power. The result is that the whole society, from top to bottom, is now spiraling downward into a whirlpool of depravity. Policing will get weaker and the criminals stronger, then after the population cries out another SARS force will be created. This cycle will continue until we begin to learn about then pursue our true purpose as Human beings on this planet. heruinterface.com

Promoted
Your Ad Here!
472
F
It’s outrageous that Tyre Nichols was subjected to such terror and brutality by the police during a routine traffic stop. We must hold ourselves accountable for the systemic racism that fuels such injustice and fight for real change.