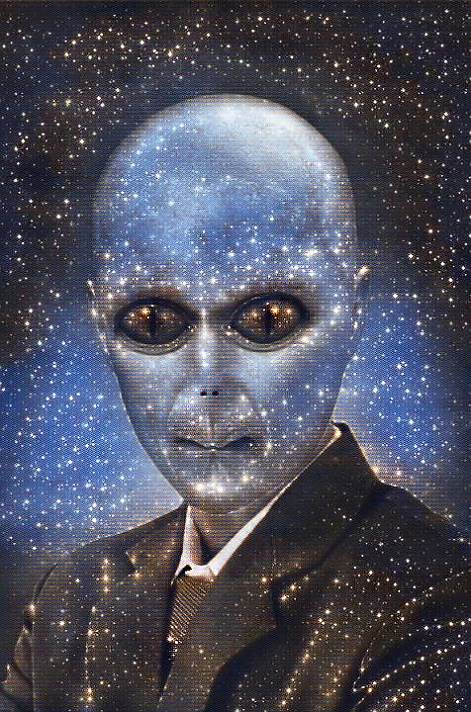 Have you heard the latest insanity from Trump supporters? Multiple credible news sources are reporting that the former head of the Israeli space agency is claiming that Aliens exist and are working with the U.S government on secret experiments that will benefit them and humanity. They quote the man as saying the following.

“Trump was on the verge of revealing that aliens exist but the aliens in the Galactic Federation said wait and let humanity calm down first. They don’t want to start mass hysteria. They want to make humanity sane and understanding first.”

If I were one of these aliens, I’d be chuckling to myself every time I think about this directive because I know that a safe level of white sanity will take another one thousand years to achieve unless they don’t see white people staying in power. If aliens are in communication with humans, I don’t see how any human, especially Trump could continue to spread hate and division throughout society.

Surely, he would gain an appreciation, love and desire to preserve all human life and abandon his white supremacist ideals. These aliens that Trump is in communication with are clearly not ethical but how can this be? The truth is that the whole story is a deception crafted by the Puppet Masters. They see how Trump has helped them so far so now that his power is ending the Puppet Masters are jumping on the QAnon bandwagon to help him maintain power over the millions of white supremacists who still believe in him.

I do not believe in most conspiracies, only the ones that support my understanding of humanity. What I do understand is that different races of people have different psychological characteristics. White people are power hungry and self-righteous, Asians are meticulous and resourceful, and Afrakans are apathetic and lack perception. The Puppet Master belongs to a sub-race but due to adversity and his strong will to survive he has developed enhanced ingenuity.

It was the Puppet Master that developed the mystery-god concept using Egyptian mythology. His concept was then co-opted by the wider white race and used as a tool of conquest and to bolster his self-righteousness. The Puppet Master was angry at first but eventually he grew to understand how he could use white supremacy to work in his favor. Today, he maintains an uneasy alliance between himself and the white supremacists because he knows that all white supremacists desire is power, money, and an exclusive paradise to rest in the after death (heaven).

Fcuk the puppet master, trump, and aliens. The puppet master loves to play the victim when he wants to get support from Black people but we see how he treats Afrakan refugees in Israel. He beats and imprisons them, he steals their internal organs to sustain himself, and he secretly injects Afrakan women with contraceptives so they cannot reproduce.

Trump loves to spew lies about doing more for Black people than any other president in history. He says he has provided the most jobs and freed the most Black prisoners but he still fails to do the one thing that Black people have been asking for the most, which is to address systemic police brutality. If this one thing could be eliminated, Black people could go about achieving the American Dream by building their own business communities again just like Black Wallstreet.

Fcuk aliens for siding with the oppressor class instead of the Saner people of Earth. Their initiatives are flawed because they align with a linear understanding of the Universe. We see it in all the concepts that science fiction has been able to create so far. That is; Life was created by chance and is now on a quest to understand the Universe. How is it that you aliens are far more advanced than humans but you still need human help? It doesn’t make sense so take your secret experiments and get lost.

Oh, and take the white supremacists with you.