My History Started In Afraka 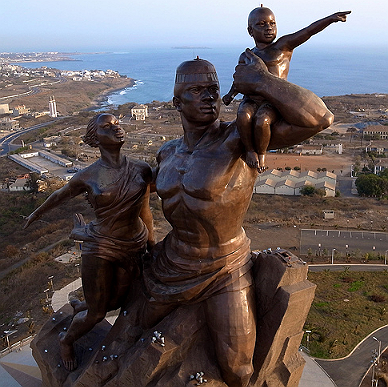 I am mindful of my history all year-round, however Black History Month is a time when those of us who are conscious about our heritage, take time to reflect on the achievements of our people while paying homage to our ancestors for their sacrifices in ensuring that the Afrakan race does not go extinct from the tree of life. A lot of us pretend we don't get the importance of BHM but while we love our mother all year, we still take time out to acknowledge and honor her on Mothers Day.

As a Black man, I am proud to bear witness to a new era in the Black liberation struggle and know that there is hope. As a child, all I wanted was to be happy. I didn’t know anything about my racial identity so, in order achieve happiness, I blindly compromised my racial identity by adopting all the things that facilitated happiness. Those things included believing in an unethical god, practicing non Afrakan cultural traditions, and sacrificing my racial pride for social inclusion.

Fortunately, over time and with the help of my conscience forcing me to seek truth, I was able to break the chains of mental slavery and embark on a quest to rediscover my true heritage. Today I am proud to be pushing an island of inspiration up out of the murky ocean of global white supremacy ideology and grow that Island so big that tidal waves of racism and the acid rain of popular culture will never erode and sink it back into obscurity. Black people who are fed up with colonial religions and ways of thinking will find my island and become inspired to continue to fight for their racial pride.

My greatest wish is for all Black people to shun their religious and cultural indoctrination and return to their Afrakan roots but I know that its not easy. We have been fragmented by race and culture mixing as well as forced religious and cultural indoctrination. Some will say “no” in their minds because since their birth, their indoctrination is all they know. Their beliefs are their rock and the source of their happiness. I cannot blame them for that, I can only blame them for not examining reality with more scrutiny but “ignorance is bliss”, as they say.

My history started in Afraka not Israel because I know that the Jews gained inspiration to create a mystery God from Egyptian mythology. They then extrapolated the history of their origin to correspond with their new-found religious inspiration. I respect the Jews for discovering that a mystery god is a thousand times more powerful than an Idol God but I will never fight them for their legacy because I lacked the perception to create an inspiration of my own.

My history started in Afraka not Rome because I am not a European. I may speak English very well and live in a land and according to a culture that they created but my Afrakan identity is ingrained in my DNA. The European are a conquering and assimilating race who found Gold in the mystery God concept of the Jews. Subsequently, they created Christianity and added to their arsenal as a tool for conquest. Today they control the flow of information to ensure that those they colonize will remain subservient to them.

My history started in Afraka not America because I am not Native American. I know some Black people are trying their best to change that history for political reasons but I'm not with it. My people were never part of an imperial war as the Moors and their other sub-sects claim. I will credit the Moors for uncovering information about the transfer of countries into Corporations in the late 18th century but I will never fight to be included in those unethical ways of living.

My history started in Afraka because Afraka is where the Great Spirit that is the Universe created the first lifeforms and placed its abstract essence inside them. Afraka is also where the Great Spirit created the first humans and allowed the lesser Spirits of the Universe to enter us and generate a consciousness better known as our Soul. Yes, your body is merely an Avatar of your Spiritual self. Our physical bodies live and die but our Souls reincarnate. I have no fear of death because I know that my Soul will be reborn on Earth or on any of the trillions of other places in the Universe where life exists.

The Great Spirit that is the Universe is not a god therefore it does not create beings and offer them salvation in exchange for obedience and loyalty. That is an unethical concept that originated in the minds of men. As you can see, the concept now has Black people competing with other races to be better Christians than Romans, better Jews than Israelis, and better Muslims than Arabs. I have news for my fellow Black people; it will never happen. There is no heaven anywhere but here on Earth. You are responsible for creating heaven so stop waiting for death to be your escape.

Our purpose here in this life is simply to experience life for all its worth. The fact that we are born Black is inconsequential on a grand scheme but since we have incarnated as part of a race that is being oppressed, our duty is to fight that oppression until the inequity ceases to exist. Part of fighting oppression is to recognize our true racial identity and not capitulate to the things in life that may facilitate temporary happiness such as bonding to other Black people based on religious or cultural ideals.