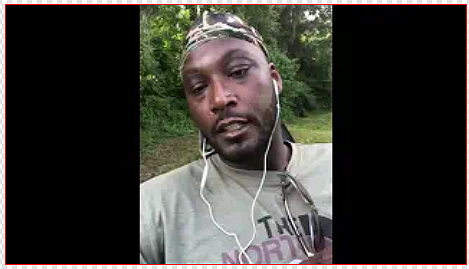 Most of us who follow sports and social media in one way or another have probably heard of Kwame brown by now. He is the “NBA Bust” who has stepped out of the shadows to confront those in the sports and entertainment industry who have given him that name and have been taking shots at him for years. In less than two weeks he has taken over the conversations on most sports shows and podcasts as well has racked up millions of followers and views on YouTube, FB, and Instagram. He has exposed the hypocrisy of several prominent fellow athletes, journalists, politicians, and celebrities such as Charlemagne the God of the Breakfast Club and he is not done. According to him, he’s on a mission to restore the image of real Black men

I started watching Kwame Brown’s videos last weekend and like most of his followers, I found him to be very intelligent, charismatic, and entertaining. Most people who find themselves in the same boat as Kwame Brown, meaning that they have become the butt of jokes due to no fault of their own, will usually retaliate by lashing out in anger towards their foes but not Kwame Brown. Instead, Kwame uses his laid-back southern country-boy demeanor to take jabs at his opponents while exposing them for the things they have hidden deep inside their closets.

After listening to Kwame Brown, it became obvious that his fight with sports commentators, ex-pro athletes, and entertainment celebrities is only a small part of a social and political grievance that has tormented Kwame Brown for a very long time and that he finally has a chance to get off his chest. There are three types of Black people in society. There are the self-destructive lost souls, the “can’t beat them, join them” folk, and there are the racially conscious. Racially conscious Black people care about the social condition of the Black race. Unfortunately, all conscious minded black people do not agree on the causes or solutions to fixing the dysfunctions of the Black race.

Kwame Brown is a conscious minded black man. He is also conservative minded therefor he believes that the solutions to black racial functionality begins with strong family values and strong gender roles. He believes that there are many black men who think like him who are fighting a losing battle against a hidden enemy that is set on destroying the black man in general. This hidden nemesis controls the media, sports, and money and is using black feminists, black celebrities, and liberal minded black intellectuals to push a homosexual agenda through various platforms.

At the risk of sounding like Dr. Boyce Watkins, who offered his intellectual opinion to Kwame Brown and got it slapped away like a week layup off a backboard, I would advise Kwame Brown to be careful who he associates himself with. A lot of conscious minded Black people are choosing to associate themselves with racists white ideology instead of building bridges with our fellow black people. I don’t blame Kwame for lashing out at his haters but as we all can clearly see; he has gone from accusing others of tearing down black people to tearing down black people himself.

Last night I watched his discussion with Judge Joe Brown and it reiterated my point. Judge Joe Brown is obviously a very successful Black man who has done much good for the Black community but he almost exposed his own self as a pedophile. He displayed a toxic old-school version of Black masculinity that is out dated. To him, a real man is one that exudes Alfa-masculinity at all times, which attracts real women and real women do not get offended by men’s sexual needs. The only problem is that he then accused Kamala Harris of sleeping her way to the top. Two wrongs don’t make a right but isn’t that intelligence on her part if she learned to exploit male weakness to get ahead?

Realistically speaking, I support Kwame Brown’s mission to restore real Black masculinity however, I don’t believe there is a Gay agenda because what affects one, affects all. If the white man is trying to turn everyone Gay then why are they also fighting to stop it within their own race? The problem is that most people don’t understand the importance of Happiness even though it’s mentioned right there in the constitutional decree.

People are born Gay due to hormone glandular defects caused by such chemicals as BPA in plastics and fast food. They then grow to pursue happiness because it is their Right as a citizen. As Gays organize and use Human Rights Laws to defend themselves, societal norms change. If there is no balance against the unbridled Pursuit of Happiness, the result is social corruption. Black people have been oppressed for so long that we are simply pursuing Happiness in any way we can and unfortunately, most of us will choose Happiness over Morality nine out of ten times.

Promoted
Your Ad Here!
373
F
It’s outrageous that Tyre Nichols was subjected to such terror and brutality by the police during a routine traffic stop. We must hold ourselves accountable for the systemic racism that fuels such injustice and fight for real change.