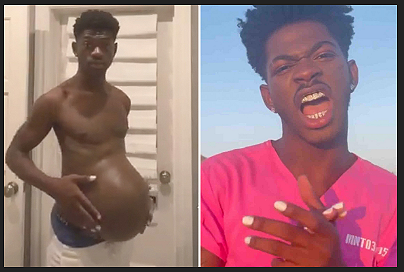 How do we put this plague back in Pandora’s Box? No, I’m not talking about Covid-19, I’m talking about Lil Nas X. The outlandishness of this idiot only seems to be getting worse. He has gone from selling sneakers with blood in them to dancing with his naked buddies in videos to now putting out images of himself with a pregnant belly. Its as if he is daring society to do something about it when everyone knows that under the protection of Human Rights, nobody can’t do a damn thing. No we wont “shut the fcuk up and mind our own business”.

Conscientious Black people all over the world are embarrassed the most because it would seem that we’ve only fought for 400 years for freedom, human and civil liberty to be uphended by Homosexuality. The first hijack attempt by Homosexuals was when LBGTQ activists began to compare their struggle with the Black Civil Rights struggle. No, they’re not the same things. The Black struggle for freedom from slavery, oppression, and discrimination has nothing to do with immorality.

Lil Nas X is just the latest tool being promoted by white supremacists to keep the Black community dysfunctional at its core. They know that the Black community is divided into two main categories; the brainwashed evangelicals and the desire dependent self-destroyers. They don’t worry about the Black evangelicals because they know that they can always use false morality to get their support. They’re also not worried about the Desire Dependent Blacks fools because they know that most Black people will always choose temporary personal Happiness over long term racial Consciousness.

The best way to get rid of people like Lil Nas X is to launch boycotts just like they are doing to Da Baby and Boosie for speaking out. Some might say that boycotts wont work against people like Lil Nas X because in this era of Social Media he doesn’t need record sales to make money. He could simply rely on his influence alone to gain sponsorship. All we need to do is to look at China where they’ve now banned Homosexuality from the media. Where did Lil Nas X get his start? On TikTok, a Chinese based Social media platform.