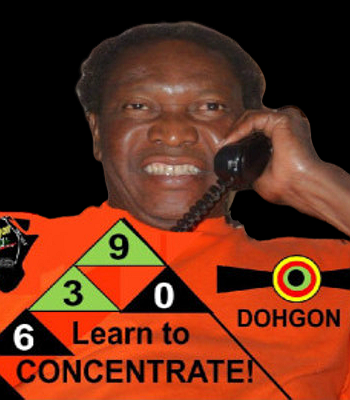 How did the universe come into existence? Most people would either answer that the universe was created by god or that hot gas caused a Big Bang and over billions of years of chance the universe evolved into what it is now. Unfortunately, those explanations lack credibility because no one knows who or what god is and the Big Bang still remains a theory. In actuality, both theories can be combined into one when we begin to understand the Dohgon formula for creation.

About 10 years ago I met a man who claimed to “know everything”. I was skeptical because I know that opinions of oneself are subjective. In learning from him I grew to understand that his opinion of himself was based on the insight of a brilliant mind. The individual I’m referring to is none other than Professor Momoh of the Dohgon University of Thought.

Professor MOmOh is a Mathematician and a Cosmogony and Neurology expert who can explain the workings of the stars as well as the workings of the chemical process of the human Brain. He descends from the Dohgon (Dogon) people of Mali, West Afraka, a very secretive tribe of people who are proven to possess detailed knowledge of the Stars long before European Astronomers.

Professor MOmOh teaches that the author of creation is abstract Pure Dark Energy Waves (PDEW), which is the net that forms the foundation of the universe. The best examples of this net are Electricity, Magnetism, and Gravity. Gravity is too obscure for most people to understand and Electricity is too dangerous for regular folk to experiment with.

Magnetism on the other hand, is perfect as most people have handled a magnet at some time in their life. When metal filings are sprinkled on a piece of paper and a Magnet is passed underneath, the metal filings will arrange themselves in circles. That is because they were manipulated by the abstract waves of energy produced by the Magnet.

We cannot see energy but we know energy exists because of its affect on physical matter. Professor MOmOh says that energy can transform into physical matter through a process and that process is how the universe was created.

The billion dollar question is how does abstract PDEWs transform into physical matter? Professor MOmOh has defined the formula for matter creation as PE(Pure Energy)=1-2-3-4  9-8  27  99-100. This formula may look strange but it is based on the fact that PDEWs have different wavelengths. Each number represents a different wavelength therefore this formula lays out the process in which PDEWs go through a permutation process to create particles of matter.

In the process, PDEWs flux or cut into half waves until Quarks combine to form Hadron particles then Atoms. The first result of this process was the Big Bang but contrary to popular belief, the process has never stopped. It is happening inside the core of every Star in the universe right now. This is why the theory that matter cannot be created or destroyed is wrong. Stars are the entrance and Black Holes are the exits.

For a deeper understanding of the Formula for Creation, please feel free to contact Professor MOmOh at the Dohgon University of Thought.

Promoted
Your Ad Here!
409
F
It’s outrageous that Tyre Nichols was subjected to such terror and brutality by the police during a routine traffic stop. We must hold ourselves accountable for the systemic racism that fuels such injustice and fight for real change.